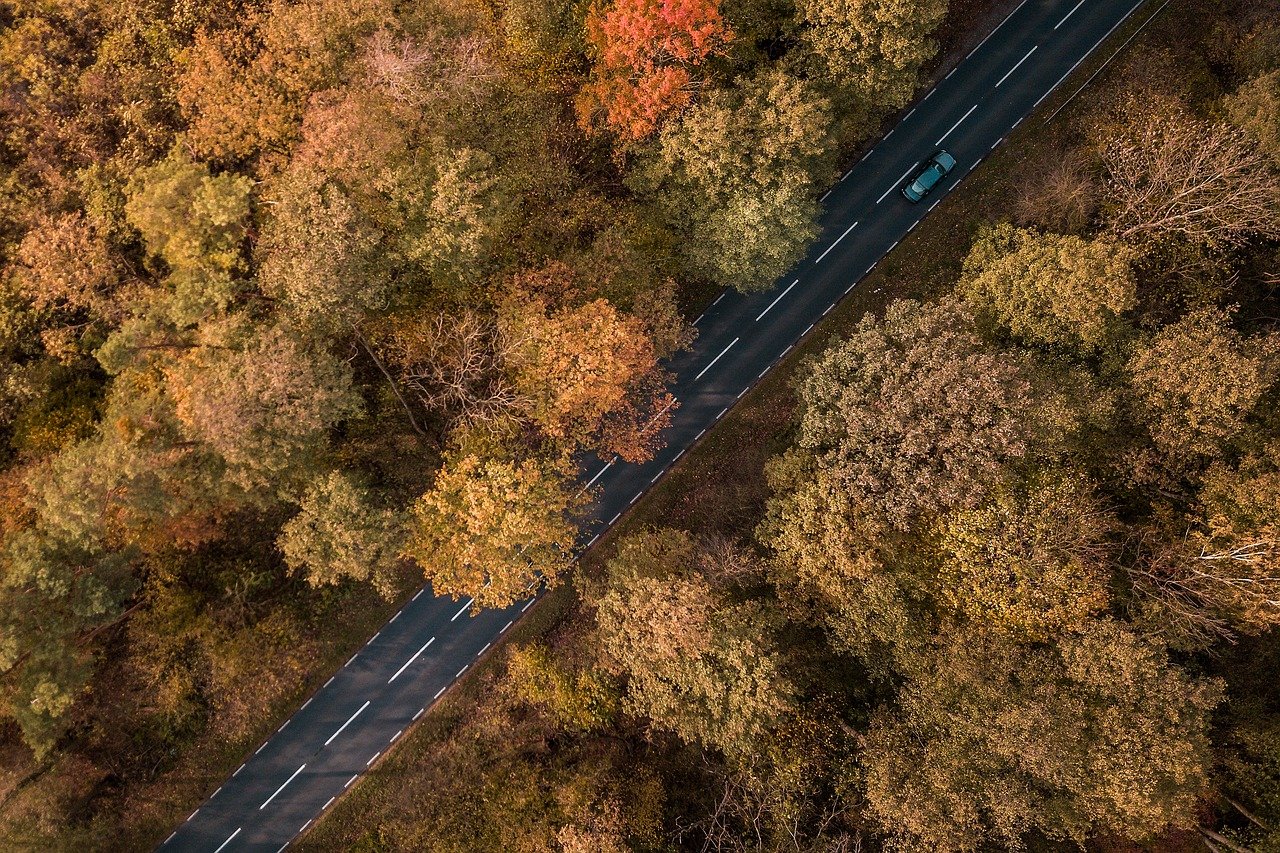 While lighting is vital, the subject and what is included and removed from a shot are more significant than capturing vivid morning colors. A fixed aperture on drone cameras creates depth in photographs. Long exposures are not possible with them.

You can’t improve a scene with hazy clouds or little depth—creativity, not rules, is the key to mastering aerial photography composition with drones. Use your eyes to see the world in a new way. The tactics listed below can assist both beginners and experts in drone photography in conquering the skies.

Use the ‘Rule of Thirds’ to Your Advantage

When taking a picture, get the greatest composition possible to avoid unnecessary cropping. Rotating and cropping to correct the composition costs you pixels. Hopefully, your ground station app displays a grid of thirds to help you compose your shot. It’s a must-have for getting your shots straight.

The Rule of Thirds applies to any visual media form. If executed properly, visually pleasing images are created. It helps to emphasize the subject and encourages the viewer’s eye to move through the photo to land on the subject.

Making Something New Out of Nothing

Look for objects that seem to be out of place when flying over an area that appears uninteresting at first. Make those things the focus of your photography. Choose one of the intersection points using the “Rule of Thirds.” as the main focal point. Place something less significant or smaller on the other side of an image to offset it.

When editing, reduce the intensity of the colors to make them stand out more in the final photographs. Cropping is a simple action that has a dramatic effect on an image. All photos benefit from this. Select the cropping tool in the picture editor and choose the box’s position. Keep in mind the goal is to place the focal point along a horizontal or vertical line and an intersecting point.

To Get a New Perspective, Fly the Drone

Just because an object or sight is unappealing on the ground doesn’t imply there isn’t a different perspective to be found in the air. Most landscapes and architecture are planned out. They usually have bold patterns and shapes, as well as attractive aesthetic features. When the pilot thought there was nothing worth photographing from the ground, some amazing images were taken.

Drone photography offers a bird’s eye perspective that is captured in high-resolution videos and images. Having another angle for looking at objects offers an artistic edge to photos. There is a wide range of visual possibilities. Drones provide a new means of seeing and capturing bustling beaches or architectural wonders that were once unattainable.

Learn How to Fly a Drone Without Using GPS

Drones occasionally lose their GPS signal. The drone goes to ATTI mode on its own. When the ground station’s warning chimes proclaim the error, it might be unpleasant and scary. When a drone is flown in strong winds, it loses its position and begins to drift.

You will avoid possible fly-away and collisions if you can rapidly adapt. The ATTI (attitude) mode maintains flight altitude accuracy while being stable. In ATTI, some drones have a higher speed and power output.

Use them to your advantage in terms of performance. Tall structures, hills, and mountains impede the signal while drones search for satellites. In ATTI mode, knowing how to operate a drone is essential. You can fly a drone without using GPS if you know how to fly it in ATTI mode.

When compared to CSC and SLR cameras, most drone cameras have modest megapixel counts. It restricts the size of an image that may be reproduced and causes a loss of detail. Flying over a topic in a coordinated pattern and capturing a series of photographs is one way to solve the challenge.

A software program can be used to sew them together. Flying at the authorized maximum height of 400 feet isn’t always enough to catch the complete scene. Take a series of shots to solve the problem. To get a clean stitched image, overlap the adjacent frames.

Regardless of the weather forecast, conditions at a site may not be as expected. Figure out how to manipulate an image to create ambiance and mood using your creativity. The dodge and burn tool is used to add shade and light to create ominous visuals. To keep the eye in the frame, use a strong vignette. You can create a sense of enclosure in an image by lighting it.

Flying in fog and clouds might seem safe, but there are moisture issues with them. If you fly a drone in the clouds for an extended time, it will return to you soaking wet. Keep the drone in the sightline and fly closer to the ground to improve visibility. Have a towel handy to dry the condensation.

It is graded on a scale of one to nine (calm to a major storm). Flying is normally safe if the Kp index is below three or four. The higher the Kp index, the more difficult it will be to get accurate GPS. The outcomes differ. Everything is fine some of the time; other times, GPS is lost for seconds or minutes, or the GPS position is hundreds of yards off.

Google Maps can be used to locate new locations.

Finding new places to fly drones can be difficult, especially when there are restrictions on where you can fly them. You can find fascinating compositions with Google Maps. It’s possible that you’ll have to seek a property owner for permission to fly over their land. Many owners have expressed interest in the requests, according to drone pilots. Flying is not socially objectionable if it is done lawfully and safely.

Keep an eye on the ISO Speed

When ISO speeds are high, small sensors do not work well. The use of an ISO speed greater than 100 may result in the introduction of undesired noise. When the ISO on a camera is increased, shots that are normally taken in auto mode should be switched to manual mode.

Drones can be highly steady when using GPS mode. Set the shutter speed to a low 1/16th of a second to use an ISO setting of 100 when the wind is light. As a result, the image is clear and motionless. Taking multiple shots increases your chances of getting a great shot.

With drone aerial photography, it is relatively simple to begin taking aerial photographs. It takes a lot of practice and work to get photographs that are worthy of the term “drone photography.” While flying a drone is simple, mastering the craft of composing from an aerial viewpoint requires time and practice. The suggestions above are intended to shorten the learning curve.

You Should Know These 5 Amazing Aerial Photography Tips